Apologies For Slavery: But, Where Are The Reparations? 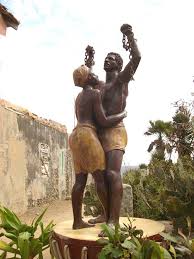 Almost 150 years after the Civil War, and the day before Juneteenth – which commemorates the emancipation of slaves in who did not know that the Civil War had ended two years earlier – the U.S. Senate finally approved a resolution apologizing for slavery.

The resolution passed in the Senate on a voice vote, said it was important for Americans to apologize for slavery “so they can move forward and seek reconciliation, justice, and harmony for all people of the .”

urges schools, colleges, universities, religious and civic institutions, businesses and professional associations to do all within their respective powers to acknowledge the transgressions of Connecticut's journey from a colony to a leading state in the abolition efforts and to learn the lessons of history in order to avoid repeating mistakes of the past and to promote racial equality and reconciliation; and

calls on all Connecticut residents to recommit their state, their communities and themselves to the proclamation of their nation's Declaration of Independence that "all persons are created equal and endowed by their creator with certain inalienable rights" and to work daily to treat all persons with abiding respect for their humanity and to eliminate racial prejudices, injustices and discrimination from our society.

While I think that both of these resolutions are important steps in acknowledging what the Connecticut resolution describes as “the history of wrongs inflicted upon blacks,” neither will do much to really repair harms caused by centuries of chattel slavery followed by decades of state sanctioned discrimination.

Reparations are the only way to repair the harms.

Unfortunately, neither resolution calls for reparations (indeed, a disclaimer tacked on at the end of the U.S. Senate’s measure said nothing in the resolution authorizes or supports reparations for slavery).

Back in 2000, I wrote a letter to the editor of the Hartford Courant about a growing call for reparations. Nearly 10 years later, the need for reparations are perhaps more urgent than ever.

Below is my letter to the editor, published June 17, 2000 in the Hartford Courant:

“With city councils across the country -- most recently, Chicago and Dallas -- passing resolutions in support of a congressional bill that would spend $8 million to study reparations for slavery, it seems as if the movement for reparations is finally being taken seriously.

Cities across should embrace this movement by passing a resolution calling for the government to pay reparations to African Americans for work their forebears did during approximately three centuries of forced servitude and for their subsequent subordination under the weight of discrimination.

Many people may object, however, claiming that reparations for the descendants of slaves are a farfetched idea. But there are a number of precedents.

For example, even though international law did not require to compensate the victims of the Third Reich, in 1952 began making reparation payments to survivors of the Holocaust, totaling more than $58 billion in present-day dollars.

And approximately 46 years after President Franklin Roosevelt ordered the evacuation, relocation and internment of 120,000 people of Japanese ancestry by the military, President Ronald Reagan signed the Civil Liberties Act of 1988, setting in motion the statutory means by which Japanese Americans would receive reparations.

The moral basis for reparations for African Americans is clear.

First, the trans-Atlantic African slave trade was one of the most horrendous crimes against humanity in the last 500 years. Tens of millions of human beings were forcibly removed from their homeland and sold into slavery in the .

Although the estimates vary, anywhere from 10 million to 25 million Africans died in the bowels of slave ships in route from Africa to the .

As a result of this holocaust of enslavement, African people in the lost their religions, languages, histories, customs, cultures and families.

Second, because of the social and economic injustices they have experienced since the end of the Civil War, more than a century after the end of slavery, compared to whites, African Americans are poorer and less educated and earn less income. Indeed, on nearly every measure of mainstream life in American society, African Americans lag behind whites.

A trust fund should be created and money from that fund should be distributed for programs designed to improve the standard of education, health and housing for black people.

The payment of group reparations would create the need and provide the opportunity for institution building in the African American community that individual compensation would not.

What would it take to adequately compensate African Americans for more than 380 years of exploitation and mistreatment? Estimates of the dollar amount of reparations vary widely.

However, even after subtracting the value of welfare programs in recent years, it would still cost several trillion dollars to adequately compensate African Americans for damages caused by slavery and years of racism and discrimination.

Unfortunately, African Americans may never receive reparations because whites either do not know or simply refuse to acknowledge that 's economic evolution once depended on slave labor and that their white ancestors participated either in selling and buying Africans or in owning them.

If is to bridge its racial divide, it must accept responsibility for the horrors of slavery and the century of systematic and government sanctioned oppression that followed. Reparations contain within them the seeds for that closure.”

Bilal, are you at all familiar with "Traces of the Trade," a documentary about a prominent white family's effort to reacquaint itself with its own complicity in the Trans-Atlantic Slave Trade? I would be curious to hear your opinion of this and similar conversation-starters. Here are two links to more info:

No way the govt should give reparations. Blacks have been coddled for the last fifty years w/ trillions spent on set aside contracts, free housing, college, etc. I think the delusions blacks have about reparations is funny, if some asshole started talking about this in a serious manner there would be another civil war.

Reparations, I believe, will be granted, eventually. Many did not believe that they would live to see the day when the United States of America would elect a Black man for president, but the day has come! I believe that all things and beings have their time and place in the universe. And, thus the issue of reparations being a part of many discussions during this present time is lending itself to be a work in progress. There are many accountants, statisticians, actuaries, mathematicians, historians, and geneologists who, if they collectively combined, their collective genius can make the figures add up to an appropriate reparation declaration. And although there will be battles for and against the amount, ultimately acknowledging that the descendants of African slaves are owed is a start!