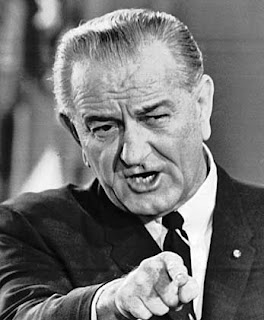 Next month will mark the 46 anniversary of one the greatest civil rights speeches ever given by an American President. On June 4, 1965, President Lyndon Baines Johnson delivered the Commencement Address at Howard University. The name of his address was, To Fulfill These Rights.

Speaking nearly a year after the passage of the Civil Rights Act of 1964 and less than a month before he would sign the Voting Rights Act of 1965 into law, President Johnson proudly hailed the legal freedoms blacks would gain because of these two landmark pieces of legislation, but he added, "freedom is not enough." The president continued:

"You do not wipe away the scars of centuries by saying: Now you are free to go where you want, and do as you desire, and choose the leaders you please."

"You do not take a person who, for years, has been hobbled by chains and liberate him, bring him up to the starting line of a race and then say, 'you are free to compete with all the others,' and still justly believe that you have been completely fair."

As impressive as these legislative achievements were, the president believed that they were only a beginning, not an end. Quoting Winston Churchill, he declared that even the soon-to-be passed Voting Rights Act "is not the end. It is not even the beginning of the end. But it is, perhaps, the end of the beginning." The "next and the more profound stage" of the civil rights movement, Johnson added, was to "seek not just freedom of opportunity," but to secure racial equality not in some abstract or theoretical fashion, rather, "equality as a fact and equality as a result."

President Johnson then discussed the deteriorating economic circumstances and growing social isolation of inner-city black families. The president drew a sharp distinction between the life chances and opportunities of a growing black middle class that was "steadily narrowing the gap between them and their white counterparts," and the bleak and troubling conditions of what he called "the great majority" of blacks, "the poor, the unemployed, the uprooted, and the dispossessed." Johnson described this second group of blacks as "another nation," adding that, "despite the court orders and the laws, despite the legislative victories and the speeches, for them the walls are rising and the gulf is widening."

Given that Assistant Secretary of Labor, Daniel Patrick Moynihan – who had just recently completed his soon to be highly controversial report, "The Negro Family: The Case for National Action" – had helped draft Johnson's speech, the president next turned his attention to the "breakdown of the Negro Family structure" that resulted from "centuries of oppression and persecution of the Negro man." The family, he contended, "is the cornerstone of our society. More than any other force it shapes the attitude, the hopes, the ambitions, and the values of the child. And when the family collapses it is the children that are usually damaged. When it happens on a massive scale the community itself is crippled."

President Johnson closed his speech by saying that he would convene later in the fall at the White House "a conference of scholars, and experts, and outstanding Negro leaders – men of both races – and officials of Government at every level." The conference's theme and title would be "To Fulfill These Rights."

After reading about Johnson's speech, Martin Luther King Jr. declared, "Never before has a president articulated the depths and dimensions [of the problems] more eloquently and profoundly." Unfortunately, no American president – Democrat or Republican – has spoken as eloquently or profoundly on the "race issue" as did President Johnson that night, nearly 46 years ago.

As we all know, however, President Johnson's escalation of the war in Vietnam divided the nation and undermined his effort to promote "equality of results" and his ambitious Great Society agenda.

One consequence of Johnson's failures, of course, is that the problems afflicting the black community that he identified that night remain with us today, and for the black lower class, have actually grown palpably worse.

According to a recent study prepared by the California-based Insight Center for Community Economic Development, children of color are more likely to be born poor and spend their lives suffering from the consequences of being raised in an impoverished family, including diminished academic achievement and a greater likelihood of financial insecurity.

The report was generated by The Insight Center's "Closing the Race Gap Initiative," which according to their website, brings "together over 150 scholars, advocates, and practitioners of color to inform the national economic debate with diverse perspectives and provide policy solutions to create a more inclusive and equitable future for all Americans."

The findings from the Insight Center's report are stunning. In 2007, nationwide, roughly one-third of white children were born to families with incomes below the poverty level, and about 14 percent had no assets (remember, there is a big difference between wealth and income: income is derived from work, government benefits, or investments; wealth is generated from savings, stocks, bonds, trust funds, retirement funds, and real estate).

By comparison, Latino (69 percent) and black (71 percent) children were far more likely to be born in families that are poor and lack assets (40 percent for both groups).

Indeed, between 2005 and 2007, the number of black families living with zero or negative net worth (debt) increased from 35 percent to 39 percent. The figures for white families did not change during this period.

President Johnson in his Commencement Address at Howard University described "equality as a fact and equality as a result," as the "next and more profound stage of the battle for civil rights" in the United States. Unfortunately, no other president since Johnson – including the current one, Barack Hussein Obama – has come close to securing the egalitarian racial goals Johnson articulated that June night or, for that matter, even come close to articulating such an ambitious agenda.

In the meantime, while we wait to elect a president up to the task, the deteriorating economic circumstances and growing social isolation of inner-city black families just simply grows worse.

My fear is that help may come too late to make a real difference.