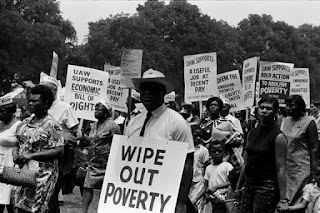 Those hardhearted bastards! I could barely control my rage when I saw the headline from my hometown newspaper, The Detroit News: "48-month welfare cap clears Senate: Gov. Snyder expected to sign bill that would cut off monthly benefit payments for thousands."

As I read the article, the rage in me kept building.

The Michigan State Senate voted to impose a 48 month lifetime cap for recipients of welfare. If the bill is signed by the governor (he intends to sign it, so it will be), the new law will immediately affect 12,600 families statewide.

"The cap," according to the article, "would be retroactive and cumulative, so families would begin to lose payments averaging $515 a month starting Oct. 1." Critics of the proposed law contend that tens of thousands of people, including more than 20,000 children, will be thrown off welfare and told to fend for themselves.

Gloating about their Party's success, Phyllis Browne, spokeswoman for Michigan's House Speaker Jase Bolger, is quoted as saying: "This has been a priority of our caucus since Day One."

The cap comes on top of other, presumably, "Day One" legislative "accomplishments" by Republican state lawmakers that include slashing unemployment benefits from 26 to 20 weeks and cutting the earned income tax credit for the working poor.

Let me get this right.

Cutting people off of welfare and shredding Michigan's social safety net in the midst of a major recession (a jobless economic recovery if you prefer the Orwellian take on the situation) has been a priority of the Republican legislative caucus "since Day One?"

These are, without a doubt, a bunch of hardhearted bastards!

I just can't wrap my mind around the idea that Republican lawmakers in Michigan plan to cut people's monthly benefits in a state which has been hit harder than practically any other state in the country by decades of deindustrialization, and more recently, the Great Recession.

With a decade's long decline in its manufacturing base, Michigan is in the midst of a severe job's crisis? The state has one of the worst unemployment rates in the country; the official unemployment rate stands at 10.3?

Although everyone is feeling pain, the black population has been hit particularly hard by the decline in Michigan's manufacturing base, especially its automobile industry. The way things are going in the automobile industry, Detroit may have to abandon its nickname, the "Motor City."

According to an Economic Policy Institute report issued in April 2011, the statewide unemployment rate for blacks is more than twice that of whites; overall, about 1-in-4 blacks in Michigan are out of work. Indeed, in Detroit, the unemployment figure is probably closer to 1-in-3 blacks.

With the American automobile industry in decline and unlikely to revisit its former glory, Michigan is a long way from an economic recovery.

Michigan is not the only state attacking the poor. This hardhearted attack on society's poorest and most vulnerable citizens has to be fought.

Here is a little background.

On April 4, 1968, Dr. Martin Luther King, Jr., was assassinated as he stood on the balcony of the Lorraine Hotel in Memphis Tennessee. Dr. King had come to Memphis in March of 1968 to support a strike by some 1300 black sanitation workers.

Memphis's black sanitation workers had staged a walkout about a month earlier to protest years of racial discrimination, unequal wages (black workers were being paid significantly less than white workers), and unsafe working conditions which had caused the recent deaths of two workers, Echol Cole and Robert Walker.

The sanitation workers demanded an end to racial discrimination, increased wages, and the right to be represented by a union (the wanted to join the American Federation of State County and Municipal Employees).

By the time black workers in Memphis went on strike, America was at a critical juncture. The optimism and energy of the black freedom struggle was waning under the weight of a backlash against the civil rights movement and its leaders. Young, more radical, black power activists – who doubted the worth of racial integration – were in the process of challenging older, more established, civil rights activists for leadership in the black community. Dr. King was under attack for his bold, and courageous, stance against the Vietnam War, which he argued correctly, was draining the nation's coffers of money needed to wage President Lyndon B. Johnson's other war, the War on Poverty.

Because of his opposition to the Vietnam War and his growing awareness of the struggles of the black poor in the urban ghettos of the North in places such as Chicago, Illinois, by 1968, Dr. King's thinking about the black freedom struggle had evolved far beyond the traditional goals of civil and political rights.

The main goals of the Poor People's Campaign were jobs, income and housing. Speaking before a crowd of 25,000 supporters of the Memphis Sanitation Workers Strike on March 18, 1968, Dr. King provided an explanation for this new focus:

With Selma, Alabama, and the voting rights bill, one era of our struggle came to an end and a new era came into being. Now our struggle is for genuine equality, which means economic equality. For we know that it isn't enough to integrate lunch counters. What does it profit a man to be able to eat at an integrated lunch counter if he doesn't earn enough money to buy a cup of coffee and a hamburger?

Dr. King and other civil rights leaders planned a Poor People's Campaign in Washington D.C. for the summer of 1968. The purpose was to bring together people of all races and ethnicities from across the country to draw the nation's attention to the needs and interests of the poor.

The Campaign issued an "economic bill of rights," asking that the federal government prioritize helping the poor by expanding anti-poverty efforts, including a commitment to full employment, a guaranteed annual income measure, and more affordable housing.

Although Dr. King was assassinated a month before, more than 50,000 people participated in the march on May 12, 1968. Leading the demonstrators, Rev. Ralph Abernathy declared:

We come with an appeal to open the doors of America to the almost 50 million Americans who have not been given a fair share of America's wealth and opportunity, and we will stay until we get it.

A week after the march, protestors returned to the city and constructed a settlement of tents and shacks on the National Mall where they refused to leave for six weeks. Organizers had planned to stay until the government took action on their demands. But, they didn't.

Over 40 years later, poverty and inequality is still with us and growing. Moreover, one political party appears to have committed itself to maintaining the racial and ethnic inequality that won't go away.

It time for a new Poor People's Campaign focused on economic justice. But this time, the protestors should not leave Washington until the government takes action on their demands.