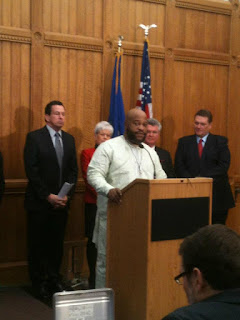 In commemoration of Dr. Martin Luther King Jr. Day, in my role as Chair of the Board of Directors for Common Cause in Connecticut, I participated in a press conference – along with Connecticut's Governor Dannel P. Malloy, Lt. Governor Nancy Wyman, and Secretary of the State Denise Merrill – to call for preserving voting rights and expanding access to voter registration.

At the press conference, the Governor and Secretary of the State proposed the following legislation: Election Day Registration, online voter registration, and amending the state's constitution to allow "no excuse" absentee voting.

My sense is that these can be really important election reforms for Connecticut. For example:

Election Day Registration can be an important tool for boosting voter turnout.

A growing number of states allow citizens to register to vote over the Internet. According to a report by the PEW Center for Research, online registration is very popular, especially among young people.

I really believe that this is going to be a good year for election reform. Below are my brief comments from the press conference.

Comments from the Press Conference

Good morning, my name is Bilal Dabir Sekou. I am an Associate Professor of Political Science in Hillyer College at the University of Hartford. I am also the Chair of the Board of Directors for Common Cause in Connecticut.

I want to thank Governor Malloy, Lieutenant-Governor Wyman, and Secretary of State Merrill for the opportunity to speak at this press conference today.

On August 18, 1970, John Gardner, founded Common Cause. Laying out a core objective of the organization, Mr Gardner wrote: "We want public officials to have literally millions of American citizens looking over their shoulders at every move they make."

The right to vote is the bedrock that our democracy is built on; an important tool the people can use to influence every move that the people's government makes.

Since 2008, in a number of states across the country, there has been a comprehensive and coordinated assault on the right to vote.

According to a new report by the NAACP, 14 states have passed 25 various measures designed to restrict or limit the ballot access of voters, threatening to disenfranchise more than 5 million people, a disproportionate number of whom are people of color, the young, and the elderly.

The people who pass these measures say that their aim is to prevent voter fraud. They are telling a lie. What they are really attempting to do is legislate voter suppression.

The Governor and Secretary of State are to be applauded for promoting measures that expand the opportunity for citizens to become involved in the political system.

As we all know, every national election, millions of people do not cast a ballot because of a registration problem or they are unable to make it to the polls for a variety of reasons.

Let me finish by saying that it is quite appropriate that we are holding this press conference today, on Martin Luther King Day, a day that draws our attention to the seminal achievements of the Civil Rights Movement.

In a 1957 speech titled "Give Us The Ballot," Dr. King spoke clearly about the link between the right to vote and democratic citizenship:

"So long as I do not firmly and irrevocably possess the right to vote I do not possess myself. I cannot make up my mind – it is made up for me. I cannot live as a democratic citizen, observing the laws I have helped to enact – I can only submit to the edict of others."

Nearly 50 years ago, President Lyndon B. Johnson signed into law the Voting Rights Act. The President framed that landmark moment in U.S. history this way:

"Many of the issues of civil rights are very complex and most difficult. But about this there can and should be no argument. Every American citizen must have an equal right to vote. There is no reason which can excuse the denial of that right. There is no duty which weighs more heavily on us than the duty we have to ensure that right."

Thank you for your good work on election reform.