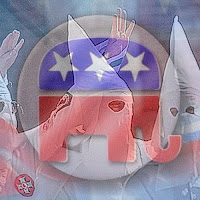 More and more, the GOP looks increasingly like the Party of the Ku Klux Klan than the Party of Lincoln. Faced with a Faustian choice to either embrace the growing racial and ethnic diversity that is sweeping the nation or cling to a dying white supremacist ideology, the Republican Party appears to have embraced the old racial order to achieve power and success in the American political system.

The effort by Republican-controlled legislatures to suppress the voting rights of people of color through a range of tactics, including voter ID laws, proof of citizenship laws, and the shortening of early voting, has been well-documented. According to the Brennan Center for Justice at New York School of Law, "Overall, 25 laws and 2 executive actions passed in 19 states since the beginning of 2011."

While Republican lawmakers claim the changes are needed to protect the integrity of the ballot box, every once in a while, they slip up and their true intentions are exposed, such as when Pennsylvania House Republican leader Mike Turzai proudly announced that the state's voter ID law would give Republican presidential candidate Mitt Romney the state's votes in November. "Voter ID, which is gonna allow Governor Romney to win the state of Pennsylvania, done," he said at a Republican State Committee meeting.

More recently, a secretly recorded video shows Republican officials training poll challengers in New Mexico on how to object to the use of Spanish translators at the polling place and on the ins and outs of how to use photo ID laws to harass and intimidate voters.

Two more recent examples of GOP brand white supremacy run amok come from an Arkansas state representative and an Arkansas state House candidate. In a 2009 self-published book, Letters To The Editor: Confession Of A Frustrated Conservative, Rep. Jon Hubbard, asserted that "the institution of slavery that the black race has long believed to be an abomination upon its people may actually have been a blessing in disguise." He also claimed that Blacks are better off in America than what they would be in Africa had it not been for slavery.

In his 2012 book, God's Law, GOP state House candidate Charlie Fuqua writes that he wants to deport all Muslims. He argues that there is "no solution to the Muslim problem short of expelling all followers of the religion from the United States." Fuqua, who served in the Arkansas House from 1996 to 1998, is surprised by all the hoopla about what he wrote. "I think my views are fairly well-accepted by most people," he claims.

As is always the case, Republican Party leaders condemn the words and verbally distance themselves from their racist brethren. This kind of stuff would be laughable if the thinking behind it was not so essential to the kind of identity the GOP is forging for itself in a nation quickly headed toward becoming majority-minority.

Republicans have decided that appealing to white's racial anxieties and the racism-fueled animosity many whites have toward people of color is a good electoral strategy – former President, Richard M. Nixon, used this strategy to woo Southern whites away from the Democratic Party in 1968. While this approach may pay dividends for the GOP in the short-term (e.g., Republican Party control of a majority of state legislatures and the governor's office), staking the future of the Party solely on an aging and shrinking white population is a stupid long-term strategy for a political party with national ambitions.
Posted by Bilal Dabir Sekou, Ph.D. at 10:55 AM

Enter the artistic world of Stormcraft Studio’s 3D Design Team and study their method with bringing 3D slot sport characters to life. If you cease the slot machine, find 1xbet a way to|you probably can} scale back the TOS to 3 seconds. Instead of focusing on the generic tips and methods you find on all casino guides on the web, it focuses on proven ways to improve your odds when you choose the video games to play.