To be Young, Black, and Male in America: Guilty of Something until Proven Innocent

Only two people know what happened the evening of February 26, 2012, in Sanford, Florida. One person is dead, a 17 year-old black male teenager, named Trayvon Martin. The other person, at the time, a 28 year-old neighborhood watch captain for a gated community name George Zimmerman, is on trial, charged with the murder of Trayvon Martin. 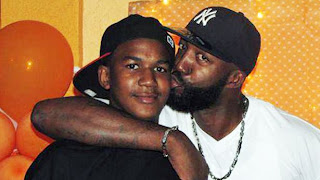 The question at the heart of the trial seems to be whether Martin was (or was not) the aggressor, provoking a struggle that resulted in Zimmerman firing a single shot into his chest at close range. Bleeding from the nose and with cuts and bruises on the back of his head, when police arrived on the scene, Zimmerman told them that he was violently attacked by Martin and fired his gun in self-defense.


According to Florida’s stand-your-ground law, if Martin was the aggressor, Zimmerman’s acted in self-defense.


When I first heard about the circumstances surrounding the death of Martin, I told my mother that I did not think that Zimmerman would be convicted of murder.


Trayvon Martin died that night for three combined reasons: he was young, black, and male. It is for these three reasons that I do not think that there will be a conviction in this trial.


Zimmerman hunted after and killed Martin that night, I believe, because he was acting on a deeply rooted racial stereotype. In America, young black males are expected to be dangerous criminals, and unpredictably violent.


In Zimmerman’s eyes, Martin fit the stereotype of a dangerous criminal that night. "This guy looks like he's up to no good, or he's on drugs or something. It's raining and he's just walking around, looking about" and "looking at all the houses," Zimmerman told a police radio dispatcher.


"He was just walking casually, not like he was trying to get out of the rain," said Zimmerman while being questioned by the police. "Something was off" about Martin, he added.


I find it hard to believe that Zimmerman would have found the behavior of a young white male walking in the rain wearing a hoody as suspicious as he thought Martin’s behavior was that night.


According to Zimmerman description of what happened, Martin also fits the stereotype of the unpredictably violent black male. After losing track of Martin in the darkness, Zimmerman told the police that just before he reached his car, Martin (unarmed and still talking on his cell phone according to a witness for the defense who heard some of the struggle before the call abruptly ended) suddenly appeared "out of nowhere," "from the darkness," as if he "jump[ed] out of the bushes."


According to Zimmerman, Martin screamed, "You got a fucking problem, homie?" After he replied no, Martin then said that he did now, and punched him. Martin then allegedly wrestled the much bigger Zimmerman to the ground. With Martin on top of him, Zimmerman yelled for help "probably 50 times (Zimmerman says that Martin covered his mouth, muffling some of his screams)." Martin told him to "Shut the fuck up," as he repeatedly pounded him in the face and banged his head against the sidewalk.


The Sanford Police Department released Zimmerman after detaining and interviewing him for about five hours because they did not believe any of the evidence contradicted his claim of self-defense. The truth of the matter is that Zimmerman racially profiled a black teenager walking in the rain wearing a hoodie. Given the pervasiveness of stereotypes about young black males in American society, I think its going to be tough for the prosecution to convince all six jurors (five of the six are white) that Zimmerman actions that night were unreasonable given Martin's race and gender.

The decision not to charge Zimmerman that night was likely influenced by the fact that the victim was young, black, and male, the same reasons why I do not believe that Zimmerman will be found guilty of the murder that he committed that night but should be punished for.
Posted by Bilal Dabir Sekou, Ph.D. at 8:52 PM

Sadly, I wholeheartedly agree. The fact that the jury is comprised of WOMEN and all but one of then is white adds to my deep concern for justice. Zimmerman's attorneys have capitalized on every available racial stereotype associated with blackness and if American history is any guide...JUSTICE WILL REMAIN AN ILLUSIVE REALITY FOR THE BLACK MAN!!!

While I agree fully with your reading of the stereotypes and the justice system, I would also draw attention to the fact that "stand your ground" laws, concealed carry laws, and the accessibility of guns in our streets turned this from a fight between two men to a murder. There's no denying that the racial stereotypes caused Zimmerman to jump to conclusions, to tell himself a story of Martin (one that is a story that too many Americans believe). But that story could have been less lethal; we need to find a way short of death to start talking about race and justice.