Learning To Win: Fighting Institutional Racism in the Schools 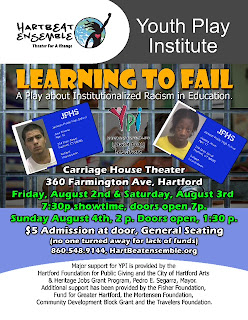 Yesterday, I saw a wonderful play by the Hartbeat Ensemble at the Carrier House Theater in Hartford. The play, Learning to Fail, was written and performed by participants of HartBeat’s Youth Play Institute (YPI).

I was invited to the play by a friend, Arlene; her daughter Asia was a member of the cast


The Hartbeat Ensemble Youth Play Institute (YPI) is an 8-week professional paid internship in acting, playwriting, theater design or stage management for young adults. All 9 of the actors in the play were between the ages of 16 and 21.


Set in a fictional public high school in Hartford, Learning to Fail, is a play about institutional racism in education. The thoughtful, well-writen, and well-acted play was a mixture of humor, biting social commentary, hip-hop music and dance, and spoken word.


Specifically, the play looks at the school to prison pipeline, the disturbing national trend in which black and Latino youth are disproportionately funneled out of public schools and into the juvenile and criminal justice systems.


To research and write the play, the youth interns conducted original research and met with a wide array of individuals to talk about the role institutional racism plays in our nation’s educational system.

I found this play on institutional racism so powerful and timely because in this so-called Age of Obama, many people believe with the election of the nation’s first black President, that racism is no longer a problem. Some people even go as far as to suggest that America is a post-racial society.


Study after study shows that many Americans, including most whites, insist that racism is no longer a determining factor in the life chances and life opportunities of people of color. To the extent that racial inequality continues to exist, blacks and other non-whites are largely responsible for their condition: rather than live in the past and complain about racism, to get ahead, they should work hard and play by the rules.


Last night’s play effectively demonstrated that we are not close to being a post-racial society; rather, racism is real and consequential in shaping the life chances and life opportunities of youth of color and that a much more clear-headed understanding how policies, practices, attitudes, structures, and beliefs operating through a key American institution come together to produce racial inequality is needed to move forward.


The young people who researched and wrote this play did a brilliant job of presenting what is a very difficult topic for many adults to wrap their minds around, the subtle and nuanced ways racism and racial discrimination continues to work in a post-Civil Rights era America.


Political Scientists, Robert C. Smith in his book, Racism in the Post Civil Rights Era: Now YouSee It, Now You Don't, defines institutional racism as occurring when “the normal, accepted, routine patterns and practices of a society's institutions have the effect or consequence of subordinating or discriminating against an individual or group or maintaining in place the results of past practices of now illegal overt racism.”


As demonstrated by the play, Learning to Fail, institutional racism operates on auto-pilot in our nation’s public schools. In a little under 2 hours, the Hartbeat Ensemble youth actors brilliantly depict the school to prison pipeline, that is, the fairly routine behaviors of teachers, principals, administrators, school board members, and local law enforcement officials that remove young people from the classroom for even the smallest of infractions and funnel them toward the juvenile and criminal justice systems.


Rather than employ traditional disciplinary measures, such as counseling or detention, students are routinely suspended or expelled for a range of reasons from talking back or cursing their teachers or not wearing school uniforms to relatively harmless infractions of the rules such as not having their shoes tied or rolling their eyes.

Without a doubt, teachers cannot teach and students cannot learn in a chaotic educational setting. However, kicking kids out of school rather than providing them with the counseling, mentoring, or perhaps family intervention they need does more harm than good. Research shows that students that are suspended or expelled from school tend to either be held back a grade, drop out, or find their way into the juvenile or criminal justice system.

Part of the reason schools turn so frequently toward such harsh disciplinary tactics, as the play aptly demonstrates, is because of the seemingly insurmountable challenges and pressures many teachers face in racially, ethnically, and socioeconomically isolated urban public school systems: inadequate resources, growing pressure to have students perform well on high stakes tests, unmanageably large class sizes, students with serious behavioral problems, a lack of proper training in classroom management, a lack of good mentoring, and administrators, staff, and school board members who function more like adversaries than colleagues.


The play also sheds light on the alarming racial disparities in terms of how punishment is meted out in the schools, especially how, as one scene depicts, students of color are singled out for unnecessarily harsher punishment. Again, research shows that students of color, especially black students, are disproportionately singled out for harsh disciplinary action, including being more likely to be arrested. Compared to white students, black students are nearly three times as likely to be suspended from school, while Latino students are one-and-a-half times more likely to be suspended.


In some ways, I’ve only tackled about half of the subjects raised in this truly insightful play. While perhaps a legitimate criticism of the play is that they raise more issues than they can adequately address in roughly 2 hours, I won’t complain about anything because I was just so damn impressed by the quality of their vision and the hard work that went into creating this work of art by a group of dedicated young people.
Posted by Bilal Dabir Sekou, Ph.D. at 6:04 PM

thank you very much for important post.We buy houses Hartford CT We Buy Hartford Connecticut Houses In Any Condition - Price Range – Or Location In The Hartford Area Sell your Hartford House fast.