Pope Francis Is No More A Socialist Than Is...: Living In The Age of Francis of Buenos Aires 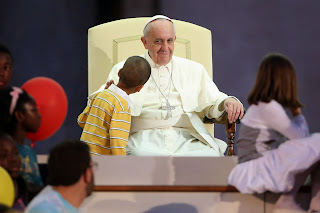 "Is Pope Francis a Socialist?" My jaw dropped when I read the title of the cover article in the December 13, 2013, on-line edition of Newsweek over my iPad. I thought to myself, this pope is no more a socialist than is Barack Obama.

Let’s face it: in America, if you offer to turn on the light switch for someone because the room is dark, conservatives will call you a socialist.

Without a doubt, this first pope from Latin America (a child of European immigrants) is as everyone points out, humble and self-effacing. He has eschewed as the Newsweek article points out, a lot of “the pomp and circumstances and the lavish trappings of his office in the Vatican that helped conjure the awe and authority of popes down the centuries.”

He took the name of a humble saint, Francis of Assisi. Wanting to lead a simple life and lead by example, rather than live in the papal apartments of the Apostolic Palace, he has opted to live in a modest guest house. You will not see Pope Francis wearing the traditional garb of the pope such as fur trimmed silk robes and red shoes, or dining on specially made dinnerware engraved with a unique papal seal to mark his tenure. There will be no papal limousine; Pope Francis prefers to ride around in a Ford Focus.

The new pope has been a godsend for the Catholic brand.

For more than a decade, the church has been under siege for its efforts to cover up child abuse by priests from all over the world and forced to pay out billions of dollars to settle legal claims by victims. The numbers of lapsed Catholics had been growing all over the world for decades. And, allegations of money-laundering at the Vatican bank is only the latest problem the church faces.

In steps Pope Francis, Time Magazine’s “Person of the Year.”

Large numbers of Catholics think highly of this pope, feel good about being Catholic once again, and many lapsed Catholics are finding their way back to the church. Even non-Catholics – for example, Christian, Muslim, Jews, Hindu, and yup, even atheists – admire and are captivated by this pope.

While I think Pope Francis gestures of modesty and compassion are genuine, and his criticism of capitalism, neo-liberalism, growing inequality, and rampant materialism are on the mark, these things do not make him a socialist?

As a matter of fact, the pope has rejected the socialist label. So, what then is he? I don’t know. One thing I do know, however, is that Pope Francis presides over an institution that is in bed with the capitalists system he denounces.

The hype in the press about Pope Francis critique of the avariciousness at the heart of the global capitalist system is built on a denial of reality about the institution he leads and the role it plays in perpetuating this system. The Pope is the CEO of one of the leading players in the global capitalist economic system that he harshly criticizes.

The Catholic Church is one of the wealthiest and most successful businesses in the world. Just how much is the church worth? No one knows. The Catholic Church does not release figures on how much wealth it sits on or its vast web of businesses and investments; hence, the scope of its global business activities and its true value is actually unknown.

In the U.S. alone, nearly 100 million Americans identify themselves as Catholic. With strong encouragement from the Vatican and most importantly because Catholic immigrants often faced harsh discrimination during the 19th and 20th centuries by White Anglo Saxon Protestants (WASP), American Catholics created a parallel society in America. Today, there are more than 6,800 Catholic schools (5 percent of all schools); 630 hospitals (11 percent of the nation’s total); and 244 colleges and universities. A number of the nation’s leading law schools, and top-ranked hospitals are Catholic.

The Economist estimated last year that in 2010, annual spending by the Vatican and church owned entities in the U.S. to be around $170 billion. No precise figures exist, but The Economist estimated that 57 percent of the church's spending in the U.S. went to Catholic health care networks, 28 percent went to colleges, 6 percent to day-to-day operations at local parishes and dioceses, and 2.7 percent to national charities. According to Slate, only 16 companies in the U.S. had more than $170 billion in total revenue (by comparison, Apple had total revenues in 2010 of $157 billion).

The church is also the largest charitable organization in the U.S., giving away, according to The Economist, through Catholic Charities USA and its subsidiaries about $5 billion in aid to the poor and serving more than 10 million people.

The church is of course a global institution, with extensive operations in the U.S., Europe, Central and South America, Asia, and Africa. Again, it’s really hard to nail down the real value of the church because the Catholic Church is not a transparent institution. Moreover, from a legal standpoint, there is no Catholic Church. The church is quite decentralized, with each diocese separately incorporated and with no formal ties to the Church in Rome. Most of the dioceses do not even share financial information with each other.

Taken as a whole, nonetheless, the assets of the global church are vast, accumulated over centuries, and range from art, real estate, church owned banks, academic institutions, breweries, vineyards, media companies and hospitals, to income derived from stock holdings, foundations, and bequests.

Several months ago, I watched a discussion on CNN about Pope Francis on a show hosted by Christian Amanpour and was, almost literally, walloped in the head by a comment comparing Pope Benedict to Pope Francis by Kean University History Department Chair, Christopher M. Bellitto:

“Benedict had a certain charisma, but it was the charisma of a university professor that you respected. Whereas Francis is the uncle you run up to and hug. Francis is the kind of Pope we need at this moment. Someone who is gentler. Someone who is more open. He is not going to change doctrine, but he is going to preach it differently.”

The church is struggling to find its place in a new world turned off by one scandal after another in the church. It has been losing membership and support in an increasingly secular Europe and North America. South America, Africa and Asia are places the church appears to be growing, and where its fundamentally conservative message is being embraced.

Pope Francis is the pope that the church needs right now. He is a child of the global south and his history and comments on issues such as poverty and inequality and the dehumanizing impact of global capitalism will help connect the church to its growing base in the non-white world. Pope Francis is helping to enhance the church's credibility in those parts of the world in which it is growing, winning it more converts, and restoring confidence in a scandal-plagued church of those who have strayed or stayed away.

We are living in the “Age of Francis of Buenos Aires.”