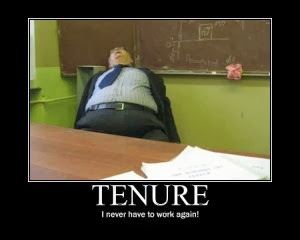 The other day, I was talking to a friend about a course I’m teaching during the winter term semester called “Sources of Power.” I was explaining to him that it is an interdisciplinary course on power and how it’s one of my favorite classes to teach at the University of Hartford.

He interrupted me and asked, “Do you have tenure?” I replied, “Yes.” Looking relieved, he responded, “That’s good.” He then listened closely as I finished my story.

I get asked about whether I have tenure quite a lot, especially by people I’ve just met. Some people ask because they are hostile to the idea that most faculty members have what they believe are “jobs for life” no matter how incompetent we are in the classroom. Others ask because they have taken college courses, and they know how poorly paid part-time and full-time non-tenured faculty are in my profession, and worry if I have financial security.

Either way, most people who ask me about tenure have only a vague idea about what it means, but, generally speaking, at the same time underestimate and overestimate its importance.

So, what is tenure? According to the American Association of University Professors (AAUP), tenure “is an arrangement whereby faculty members, after successful completion of a period of probationary service, can be dismissed only for adequate cause or other possible circumstances and only after a hearing before a faculty committee.”

Contrary to what many people think, tenure is not “a job for life.” Anyone can be fired. For those of us who have it, without a doubt, tenure represents job security, but most importantly, it reinforces academic freedom, which according to AAUP is “full freedom in research and in the publication of the results” and “freedom in the classroom” within, if necessary, agreed upon boundaries set in writing at the time of hiring.

“Tenure is a means to certain ends; specifically: (1) freedom of teaching and research and of extramural activities, and (2) a sufficient degree of economic security to make the profession attractive to men and women of ability. Freedom and economic security, hence, tenure, are indispensable to the success of an institution in fulfilling its obligations to its students and to society.”

What those outside of academe may or may not know is that the vast majority of us who teach do not have tenure, and tenure-track jobs are increasingly harder to come by.

According to a 2013 Inside Higher Ed Survey of College and University Chief Academic Officers, 65 percent of provosts at public and private colleges and universities say they rely "significantly on non-tenure-track faculty for instruction." As the leader of their college or university’s academic affairs division, provosts are keenly aware of their institution’s dependence on non-tenured faculty.

In the ideal world, according to the AAUP, no more than 15 percent of instructors should be non-tenure-track. In the real world, 2 out of 3 professors are untenured, and if you include graduate students, roughly 76 percent of courses are being taught by people who have not been awarded tenure. According to AAUP, more than half of all faculty hold part-time appointments. The Inside Higher Ed survey found that two-thirds of provosts said they are skeptical that this over-dependence on non-tenured faculty will change anytime soon.

Meanwhile, even though the awarding of tenure is an established practice in much of academe, according to the survey, “an apparent skepticism for tenure shows up in the very high percentage who [chief academic officers] are open to the idea of long-term faculty contracts in its stead.” In fact, roughly 2 out of 3 provosts (64 percent) said they favored a system of long-term contracts for faculty members over the existing system of tenure. Chief academic officers at both public and private nonprofit colleges and universities were asked if they agree or disagree (on a five-point scale) with the statement: "Future generations of faculty in this country should not expect tenure to be a factor in their employment at higher education institutions." Among public colleges and universities, 58 percent of provosts said they agreed or strongly agreed (68 percent at community colleges). Among private nonprofit institutions, 53 percent of provosts agreed or strongly agreed with the statement.

Why do colleges and universities increasingly rely on part-time and full-time non-tenured faculty members? Part of the reason for this more recently is financial. The downturn in the economy has negatively impacted the endowments of private nonprofit institutions. For public colleges and universities, the loss of state support for higher education is an important factor.

Another reason for the large number of non-tenured faculty is that doctoral degree granting institutions in the U.S. produce a lot of people with Ph.D.’s each year. Between 2005 and 2009 American universities produced more than 100,000 new doctoral degrees; while not everyone with a Ph.D. seeks a career in academe, during this same time period, there were only about 16,000 available jobs. Why offer tenure when you have such a large pool of surplus laborers to choose from?

I think the most important reason, however, is that contingent faculty is cheaper to hire (and a lot easier to exploit), especially part-time faculty. As we all know and as AAUP points out, many part-time faculty members teach the equivalent of a full-time load of classes, and often support themselves by shuttling between multiple campuses to teach while trying to maintain meaningful relationships with their students. And, by virtue of the fact that they are part-time, many do not have employer supplied health care or access to retirement plans.

The Desktop segment accounts for the largest market share and is estimated to grow at a CAGR of eleven.4% over the forecast period. Many users choose using desktops for betting 온라인카지노 as installing and downloading on line casino software program proves simpler on desktops. Furthermore, easy accessibility, the device's user-friendly interface, and navigation between games encourage gamblers to decide on} a desktop.