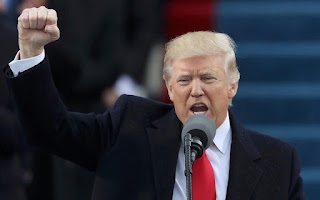 President Donald J. Trump is a confidence man. A con man is someone who swindles his victims by way of a confidence game. Confidence men gain their victims trust, playing on some of our most basic human weaknesses (and strengths), such as, kindness, opportunism, dishonesty, decency, arrogance, empathy, recklessness, gullibility, innocence, desperation, generosity, and greed.

Trump has been hustling people for a long time. His ability to con people has rewarded him handsomely over the years and now has resulted in him becoming the 45th President of the United States.

The foundational work for the confidence game started about 18 months before Election Day when Trump announced his candidacy. The scam “officially” hit its apogee, however, on Friday, January 20, 2016, when he was sworn in and gave one of the darkest speeches ever given by an incoming president.

In his inaugural address, Trump invoked dark dystopian imagery that does not match reality. Although U.S. crime rates are half of what they were in 1991, Trump described the country as crime ridden and promised to stop the “American carnage." Even though welfare rolls dropped under Obama and continues to be lower than it was before Bill Clinton signed into law a radical welfare reform bill, he promised to “get our people off of welfare and back to work.” While the U.S. Border Patrol budget has increased threefold since 1991 and the number of agents patrolling the border has doubled, he promised to “bring back our borders,” blaming both Democrats and Republican administrations for “refusing to defend our” border. And, despite 75 months of job growth (albeit anemic) and an unemployment rate of 4.9 percent (a questionable figure given the lack of quality jobs created since the end of the Great Recession and the number of people underemployed or have simply left the job market), to make America Great Again, Trump has promised to “bring back our jobs.”

"Rusted out factories are scattered like tombstones across the landscape of our nation," Trump said in his inaugural address. "The wealth of our middle class has been ripped from our homes and redistributed all cross the world," he added. Laying out his vision for the future, “buy American and hire American,” Trump has vowed to create as many as 25 million, mostly manufacturing and/or good paying jobs over the next decade. He has also promised in the past an annual economic growth rate of 4 percent.

There are not many specifics to his plan beyond badly needed infrastructure spending, and the usual Republican, Wall Street, and monopoly capital corporation wish list of massive tax cuts for corporations and individuals (most of which will go to the super rich), the gutting of the corporate regulatory system, and a renegotiation of trade deals, such as NAFTA to favor American corporate interests.

How could Trump deliver on his promise? Short of, perhaps, eliminating the use of innovations in technology as a way to lower labor costs and increase efficiency that corporations are so fond of, pulling all the robots and computers out of the factories and replacing them with human beings, moving back to America nearly every manufacturing corporation that has moved abroad in the last 50 years, lowering corporate tax rates to practically zero and then give them taxpayer money to encourage investments, raising worker salaries to where they should be if they had kept pace with inflation since the 1970s so they can go to malls and go on a spending spree, raising the tax rate to about 85 percent for the top earners and transferring that wealth in the form of direct payments to individuals who will go out and spend it and not invest it in stock to build their nest egg, and erecting trade barriers to keep cheap foreign goods out of America so that we only buy American, I don’t see how Trump will deliver on his 25 million new jobs and 4 percent annual growth of the economy.

Given that most of the 11 million jobs created during the Obama years were in the service sector, Trump promised, in typical con man fashion, things he never intends to and will never be able to deliver.

Confidence games work because the victims have trust or faith in the confidence man, belief in the powers, trustworthiness, or reliability of this person, and the “marks” or “suckers” are certain that the outcome will work in their favor. His core constituency believes he will and can do what he has promised. According to exit polls, 80 percent of Trump supporters are confident that he can bring about the kind of change needed to make America great again.

It is perhaps not a kind thing to say, but, P.T. Barnum got it right, “There is a sucker born every minute.”
Posted by Bilal Dabir Sekou, Ph.D. at 3:26 PM