After meeting with presidents and chancellors of historically black colleges and universities at the White House, charter school advocate and Education Secretary Betsy Devos released an astonishing statement: 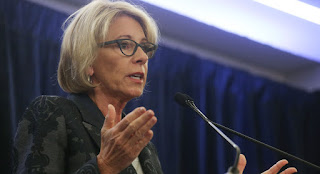 A key priority for this administration is to help develop opportunities for communities that are often the most underserved. Rather than focus solely on funding, we must be willing to make the tangible, structural reforms that will allow students to reach their full potential.
Historically Black Colleges and Universities (HBCUs) have done this since their founding. They started from the fact that there were too many students in America who did not have equal access to education. They saw that the system wasn't working, that there was an absence of opportunity, so they took it upon themselves to provide the solution.
HBCUs are real pioneers when it comes to school choice. They are living proof that when more options are provided to students, they are afforded greater access and greater quality. Their success has shown that more options help students flourish.
To be clear, historically black colleges and universities are the product of exclusion, not “choice.”
Secretary Devos did not simply attempt to “airbrush” or “whitewash” history. She is engaged in something even more nefarious than that. In attempting to rewrite the history of the origins of most historically black colleges and universities (HCBU’s), she rips out, wipes clean and attempts to sanitize the post-Civil War and Jim Crow eras of American history.
Before the Civil War, the opportunity to receive a college education was limited to a small number of black students who attended a handful of schools such as Oberlin College in Ohio and Berea College in Kentucky.
After the Civil War things started to change with the passage of the Morrill Land-Grant Act in 1862, which gave federal lands to the states so that they could open colleges and universities to educate farmers, scientists, and teachers. However, in the South, the overwhelming majority of these new institutions excluded blacks from attending.
Targeting the Confederate states, the Morrill Act of 1890, attempted to rectify the problem of blacks being excluded from white colleges and universities by stipulating that federal land-grant dollars used to create schools either had to make those schools available to black and white students or create a dual, segregated system of education with schools designed to serve the educational needs of black students. Sixteen all-black colleges and universities came into existence after receiving land-grant funds.
Between the 1870s and 1910, most of the public HBCU’s were created. During this period, private HBCU’s were also created, either due to the initiative of black people themselves, or with the help of the American Missionary Association (AMA) and the Freedmen’s Bureau.
But, according to the nation’s Education Secretary, the origin of the Jim Crow styled system of education that emerged during the decades that followed the Civil War was not the product of segregation and the ideology of white supremacy.
Devos version of the story strongly suggests that black students were not prevented from attending white colleges and universities. Rather than try to learn, perhaps, in hostile settings, black people chose to create their own institutions to meet their educational needs, triumphantly pioneering the school choice movement.
What Devos is trying to do is hardly an innocent act and should not be categorized as simply an alternative fact. She is trying to make natural and unproblematic a period in American history when white supremacy reigned supreme. In other words, she tore out and rewrote a period of American history when vigilante violence in the form of lynchings was routine and economic exploitation and social and political exclusion of black people was normalized and sanctioned by the state to fit her narrow agenda of promoting school choice.
Posted by Bilal Dabir Sekou, Ph.D. at 3:44 PM

Devos presents an advocacy argument for school choice, and thus for charter schools, in particular for children of color.
Consider the sales pitch for charter schools: "We can do the best job for you, and we are your only hope." Fortunately the families of Bridgeport have rejected that argument several times in the past few years, and the Massachusetts voters also rejected it last fall.
What these charter orgs don't tell the public is that they can do this (1) only if they don't have to teach children with special needs (including ESL instruction), (2) only if they hire un-certified, inexperienced teachers, and (3) only if the taxpayers agree to pay the exorbitant, un-audited fees for administrators and buildings. So, while these corporate orgs get to seek profits, via the diversion of public monies from the public schools, what happens to the children left "behind" to suffer with reduced educational opportunities in the public schools? "
How much choice is there, actually? How many students of color actually get to attend a school of their choice? And how do they feel when they are rejected and sent "back" to a school labeled "failing" by our own State Department of Education, on the basis of course materials and assessment tests that have been shown to be flawed in so many respects?
We need to provide better support to our public schools - and their families and teachers - to improve the public schools - not to destroy them - so that children who have no real choice can go "ahead" to an excellent public school, just as the HBCU young adults who had (and may still have) no choice could attend an excellent HBCU college.

Correction to my comment of February 28:
Devos presents a sadly uninformed advocacy argument ....