Resistance to Trump And My Hope We Are Witnessing The Maturing Of A Progressive Movement. 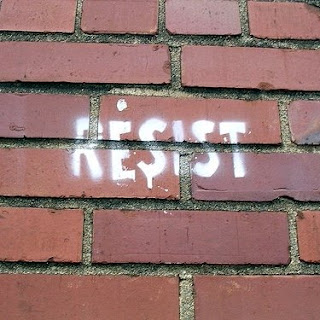 Donald Trump is emblematic of an American democratic experiment in crisis. Trump is dangerous, lawless, and unfit to lead and never should have been elected President. He thinks and operates like a tyrant, not the leader of a Democratic Republic.

I believe that his supporters know deep down that he is a racist, misogynist, homophobe, and xenophobe. But, they love him because he shares many of their values, makes them laugh, and sticks it to what they “believe” are the multiculturalist, cosmopolitan, secular, politically correct, sandal wearing, latte coffee drinking liberals, who hate America, and reject the values they “believe” the country was built on, such as, family, Christianity, liberty, freedom, hard work, and sacrifice.

They have no interest in listening to any of us that point out the nation’s long history of white supremacy, heterosexual patriarchy, genocide, forced servitude, bigotry, religious chauvinism, militarism, and intolerance of the other.

Nonetheless, although the nation is deeply divided and our institutions are under assault from the Trump Regime, I am hopeful that the resistance to Trump is planting the seeds necessary for the maturing of a progressive movement that will radically transform American society.

I’m hopeful that a coalition of people of color, whites, LGBTQ and young people, working together, can bring us out of this crisis and help our country to finally live up to its own promises.

While hopeful, I’m not optimistic that a progressive movement with the potential to radically transform America can actually occur.

Even though we use these words interchangeably, hope and optimism are not the same. Optimism suggests confidence in the future, faith that things will be alright. On the other hand, hope is the belief that something desired might happen if we do the hard work of bringing it about.

The Trump Presidency has exposed just how deeply divided we are as a country especially by race, and hence, any sane person should temper their optimism given the amount of work ahead of us.

The White backlash that elevated Trump to the White House has been building ever since the passage of the Civil Rights Act of 1964 and the Voting Rights Act of 1965 – which includes the abandonment of the Democratic Party by middle-and working-class whites, reflexive support for draconian measures designed to control crime and punish offenders, a gun fetish and opposition to reasonable gun control laws that have left schools and other public spaces vulnerable to once unthinkable mass murder, a belief held by a majority of whites that they are victimized by widespread “reverse” discrimination, declining support of social safety net programs that once largely benefited only whites until the welfare rights movement of the 1960s expanded them to people of color, and resistance to integrated neighborhoods and schools resulting in white flight from central cities into racially isolated neighborhoods in the suburbs (evening moving deep into the woods and what used to be farmland).

I must admit, it’s difficult to be hopeful when the police are shooting unarmed black and brown people in the back, legislators and courts are making it harder for the poor and people of color to vote, the social safety net is being gutted to lavish tax cuts on the rich while denying people access to quality and affordable housing and healthcare and putting vulnerable people’s lives at risk leading to premature death, and children are being kidnapped from their parents and then used as ransom to get their mothers and fathers to leave the country.

But, I believe the world is worth fighting for and I’m hopeful that change can come.
Posted by Bilal Dabir Sekou, Ph.D. at 2:49 PM