Young People Will Have To Bring About Fundamental Change: Their Elders Are Only Comfortable With The Status Quo 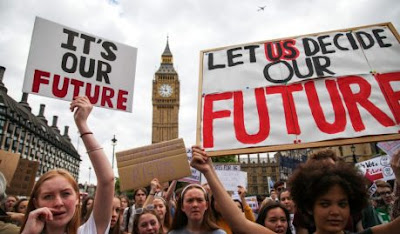 I hope young people are paying close attention to the Democratic Party presidential nomination race. The Party does not have their interest or needs in mind. It is time for them to fight for their future.

In the beginning, I must admit, I was really excited by the field of candidates seeking the Democratic Party nomination for President. Donald Trump is one of the most unapologetic racist, xenophobic, and sexist individuals ever elected to be President of the United States.

When the race started, it was the most diverse group of candidates in the history of the Democratic Party presidential nomination process. With roughly 8 months to go, two white men in their late 70s with sharp ideological and policy differences are the leading candidates fighting for the nomination. Although it is not a surprise, this is not what I had hoped for at the beginning of this process.

On one side is Joe Biden, 77-year old former U.S. Senator and Barack Obama’s vice-president and pal who has sought the presidency on 2 other occasions. He is a moderate who believes in bipartisanship and incremental change.

On the other side is Bernie Sanders, a 78-year old Senator from Vermont who is self-identified Democratic Socialist who has for decades advocated aggressively for fundamental change to our social and economic systems.

The Democratic Party establishment is uniting around Biden for what I describe as ‘Operation WIMP’ (Win Independent Moderate People). The goal is to beat back the under 40 years-old supporters of Sanders and his brand of socialism they admire, take the black vote for granted (where else do we have to go), and win back Trump supporters like the mythical Joe the Plumber and Becky the Soccer, Lacrosse, Crew, Basketball, Baseball, I Packed Your Lunch And Here Is Your Homework, Do All The Cooking and Cleaning Suburban Mom.

The stakes are quite obvious.

To the establishment, if Biden wins the nomination, there will be no more talk about ‘free’ or ‘universal’ stuff, just ONLY the stuff we can afford? What this means then is that a Biden presidency puts back on the table such status quo proposals (and perhaps some bipartisanship support) for things like entitlement reform, the closing of some loopholes in the tax code, limiting pollution through Cap and Trade, and lowering interest rates on student loans.

Off the table, of course will be the kind of fundamental change that progressives and young people want, the kind of change that has attracted them to the Sanders campaign and may give them a reason to not support the Democratic Party in the future if Biden loses the contest in November.

I did a presentation the other day for a group of mostly students of color coming from working- and middle-class families as part of Hillyer College Admissions Day, a group of young people who would benefit from the elimination of student loan debt and universal healthcare.

Unfortunately for them, the Democratic Party establishment thinks helping them will cost the nation too much.

I talked with these students about the importance of citizen engagement and why it is imperative for them to not be spectators, but actors, to create the kind of world they want to live in.

We talked about the expectations of democratic citizenship (things like to be interested in politics, be knowledgeable, and do more than just vote). I asked them about whether they planned to vote in November if they’re eligible and they raised their hands - some of them are registered to vote already (one mentioned going back to MA to vote today).

I reminded them that voting is only a first step and emphasized the importance of linking the things they care about like college affordability and saving the environment with political activism.

I hope I got through to them because the current group of political leaders in both the Democratic and Republican Party are not prioritizing their interest and needs. If they want fundamental change, they will have to work to bring it about.
Posted by Bilal Dabir Sekou, Ph.D. at 6:16 PM

To what degree do you feel the current pandemic crisis and its exposure of inequities in health care and labor structure (particularly, but also the attendant inequalities in housing, etc.) will shape the Democratic platform? Since you wrote this, Biden has become the defacto nominee but it seems to me that we have the potential to push the party platform further to the left with pressure after current events.