It’s Time For More, Not Less Pressure Now That Joe Biden Is President 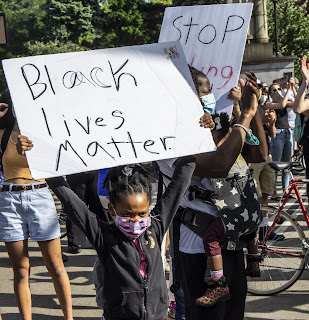 It’s hard to describe with words the relief I felt when Joe Biden and Kamala Harris took their oaths of office. Like most black people in America, I live with a constant sense of vulnerability, heightened of course, during the last four years by the presence of a white supremacist in the White House, Donald J. Trump.

I listened closely to the words of the newly elected President, Joe Biden, during his inauguration address. I was quite moved by his speech, especially when he talked about the need to heal the nation by defeating white supremacy:

“A cry for racial justice some 400 years in the making moves us," Biden said. "The dream of justice for all will be deferred no longer… And now, a rise in political extremism, white supremacy, domestic terrorism that we must confront, and we will defeat. To overcome these challenges – to restore the soul and to secure the future of America – requires more than words.”

“With unity,” he added, “we can do great things. Important things… We can deliver racial justice.”

Although his speech left me more hopeful about the future than I have felt in a while, I asked myself that day and since then a lot of questions.

How does a nation restore a soul it willingly forfeited in a deal with the devil to be born – the original sin of slavery? It troubles me that for some 400 years black people have dreamed of justice and a secure future in America but have mostly received only empty promises and been forced to live with insecurity and dreams deferred. I reminded myself that domestic terrorism (the Klu Klux Klan, lynch mobs, extra-judicial killings of black people by the police, and the wanton destruction of any symbol of black progress) and white supremacists in the White House and the halls of Congress are not new. I thought to myself about just how difficult the next four years will be and how much work needs to be done to deliver racial justice.

So, how do we make sure that President Biden’s promises are not just empty words?

We have to make him do it!

The Biden-Harris administration, like any other administration needs to be pressured to do the right thing. Political action in the form of mobilization, conflict, and confrontation like the nation saw last summer is needed now more than ever.

The murders of George Floyd, Brianna Taylor and others by the police ignited an uprising that produced more than 10,000 protests domestically and around the world. The Black Lives Matter movement mobilized people, awakened the consciousness of the nation, and set in motion subjective dynamics that led black people in cities across the country to protect and defend their human rights and their own dignity, something we have not seen on such a large scale since the black freedom struggle of the mid-1950s to late-1960s.

The struggle to make Black Lives Matter must not be allowed to dissipate due to the euphoria we all felt on January 20 after record turnout by black people last November at the polls helped seal the fate of the neo-fascist Trump regime.

It’s time for more, not less pressure to make America the country it should be!