The Mar-a-Lago Club: Trump, Conspiracies, and the Cult

After centuries of preaching to the masses and proselytizing people, once small, fringe pagan cults, evolved into the largest religions in the world – Buddhism, Christianity, and Islam. 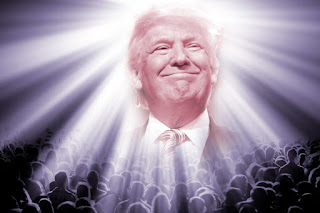 These religions now have billions of followers.

America has been home to a lot of religious fringe groups/cults over the years: The Branch Davidians, the Mansion Family, Children of God/Family International, Heaven’s Gate, and People’s Temple are a few of the most notorious.

Let’s give this new cult a name: The Mar-a-Lago Club.

Through both preaching at his massive political rallies and proselytizing daily over social media, Trump managed to win control of the hearts and minds of the base of the Republican Party and establish himself as a cult-like figure with millions of mostly-white followers, men and women, young and old, rich and poor.

To the faithful, the Mar-a-Lago Club leader is a prophet and a savior, intrinsically good, infallible, and a truth teller in a world run by crooked politicians, unscrupulous businessmen and women, and people who hate America like the four women of color in Congress who make up “The Squad.”

They believe they are under attack because of their faith in Trump and that they are victimized by a political system that has steered so far away from the ideas of the founders of the republic that the country would be unrecognizable to them (I do agree that they would be shocked that slavery ended and that black people have the right to vote).

Think for a moment about what the media calls the “Big Lie,” that Trump lost the 2020 presidential election due to widespread election fraud. To his followers in the Republican Party, he did not lose the election; as he prophesized, a Trump victory was stolen from them.

According to a new national poll by Rueters/Ipsos:

•    About 53 percent of GOPer’s say that Trump is the true president.

•    A full 56 percent of Republicans say that the Biden victory during the 2020 elections was “the result of illegal voting or election rigging.”

•    More than 60 percent of Republicans either “strongly” (39 percent) or “somewhat” (22 percent) agree with the statement that the 2020 presidential election was “stolen from Donald Trump.”

It appears that the first and last “pillar of faith” is to trust what comes out of the savior’s mouth even if it has been debunked over-and-over.

Mar-a-Lago Club, the place, has spiritual meaning to Trump supporters. It’s where their savior is housed (although it is not as opulent as Vatican City).

Politicians make the trip – as if on a pilgrimage – to the 126-room, 62,500-sqare-foot mansion in Palm Beach, Florida, to seek advice, pose for pictures, and win the approval of the former president turned savior.

Like a trip to the Holy Land, the pilgrim gets to see and touch the physical manifestation of their faith (after paying your membership entrance fee of only $200,000, you can rent a room at a discounted price and sleep in the same building with the savior) and comes away with a strong sense of moral and political clarity.

QAnon is the faith that holds the cult together. Prophets (and even saviors) tend to receive their revelations from a special messenger sent by God. Think of “Q” as the angel Gabriel who recites the word of God not in a cave but in social media posts over the internet.

According to The New York Times headline: QAnon Now as Popular in U.S. as Some Major Religions.

According to a recent PRRI poll, core tenets of the QAnon faith are held by a sizable portion of the base of the Republican Party:

•    Roughly 23 percent of GOPer’s believe “the government, media, and financial worlds in the U.S. are controlled by a group of Satan-worshipping pedophiles who run a global child sex trafficking operation.”

•    About 28 percent of Republicans believe “there is a storm coming soon that will sweep away the elites in power and restore the rightful leaders.”

•    Around 28 percent of Republicans believe “because things have gotten so far off track, true American patriots may have to resort to violence in order to save our country.”

•    Whereas most Democrats (58 percent) reject QAnon, compared to 40 percent of independents, only 21 percent of Republicans are QAnon rejecters.

Sobering stuff! Okay, stop and listen to the crickets for 30 seconds and then finish reading.

The media has it all wrong about the Mar-a-Lago Club cult.

Trump is not going away, and the Republican Party has not been hijacked by a right-wing conspiracy movement. What we see today is the logical outcome of the path the party chose decades ago.

Like the last meteorite that killed all the dinosaurs millions of years before angels started to reveal the word of God to men, the GOP has been hurdling toward becoming an ethnonationalist white Christian political party for more than half a century.

The failed 1964 presidential bid of far-right Arizona Senator, Barry Goldwater, helped give birth to the modern Republican Party. After accepting his party’s nomination in 1964, Goldwater brought the far-right to the center stage.

Ever since Goldwater’s failed bid for the presidency, Republicans have been fighting to protect an idea of America that is based on a common language, a common faith, and a common ethnic ancestry. Their idea of America is that it is a conservative, white, patriarchal, and Christian nation.

The great religions of the world all claim that their prophets received the word of God through revelation and then communicated it to their fellow human beings. To the true believers, “Q” is God’s emissary on earth who uses the internet like a burning bush, Trump is their savior, and the Mar-a-Lago Club is the geographical focal point of their faith.
Posted by Bilal Dabir Sekou, Ph.D. at 12:20 PM