Connecticut Must Say No To Austerity: Make Corporatons And The Rich Pay Their Fair Share 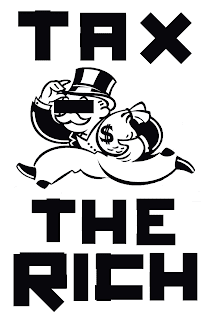 More than nine years after the start of the 2007-09 Great Recession, the U.S. economy is not working for most Americans. The recovery in terms of GDP and job growth has been weak and uneven across the country.

According to a new report by the Economic Policy Institute (EPI), a major reason for the slow recovery is austerity, a series of economic policies that rely primarily on spending cuts and reducing the taxes of wealthy Americans and corporations to reduce deficits.

Connecticut’s political leaders must resist calls for austerity measures to deal with our current revenue crisis. Slashing government spending and tax cuts for those who least need them will not make things better; austerity will only make things worse. What Connecticut needs is a more progressive tax system to solve its revenue crisis.

Here in Connecticut, the recovery to the Great Recession has been anemic. The state is projected to have a more than $5 billion revenue shortfall over the next 2 years. This year’s legislative session ended without a budget deal because lawmakers could not agree on how to respond to the state’s revenue crisis and where to make major cuts.

There is mounting evidence that austerity does not work. Following the world-wide economic decline during the late 2000s, many European countries implemented these kinds of measures. For the last seven years, the British people have been living under an austerity-obsessed government. Things have not gotten better: the social safety net is under attack; public and private debt has increased; the unemployment rate is higher; inequality has grown.

It should come as no surprise that voters in the U.K. recently voted decisively against the austerity measures of their government and an economic system that is not working for them.

In the U.S., Kansas experimented with the idea that cutting the taxes of the very wealthy and eliminating certain business taxes would spur economic growth. Instead, the budget deficit exploded threatening core state functions such as funding for public schools and other vital services. Overriding a veto by the Republican governor, a Republican controlled legislature approved a $1.2 billion tax hike over the next two years to plug the deficit.

The shocking election results in the U.K. and the failed experiment in Kansas should be a wake-up call to politicians in Connecticut that people do not want austerity.

Reducing state and local government spending and giving tax breaks to the rich and corporations will only result in a reduction of jobs in the public and private sectors and the erosion of vital government services for some of the state’s most economically vulnerable people. Connecticut residents deserve good schools, top-notch colleges and universities, well-run local services, and improved infrastructure and utilities, not austerity.

According to EPI, “Connecticut has ample room to move further toward a state budget that strengthens public investment and other vital forms of state and local spending and that funds these investments with progressive revenue sources, including more revenue from the business sector.”

Their report shows that Connecticut’s wealthiest residents and corporations are not overburdened with taxes. In fact, Connecticut residents in the top marginal income tax bracket pay less in taxes than residents in both New York and New Jersey. And, based on an annual ranking of state and local business taxes, Connecticut businesses have one of the “lightest business tax regimes in the country.”

In short, austerity is a choice; it is not a necessity nor an inevitability. There is little evidence that cutting corporate tax rates will spur long-term economic growth or that raising the taxes of those in the top income brackets will lead to a mass exodus of wealthy people or corporations from the state.

A better path forward for Connecticut to respond to its revenue crisis should include several steps. First, a progressive tax system that asks our wealthiest citizens with the ability to pay more to do just that, pay more. Second, close corporate loopholes (government spending on tax credits, exemptions, deductions, etc.) in the business tax code to raise additional revenue without raising taxes on corporations. And last, protect the social safety net and increase public investments in for example K-12 and higher education, which over the long term can lead to economy-wide productivity growth and higher wages for workers.
Posted by Bilal Dabir Sekou, Ph.D. at 7:02 AM

Agree with everything you have said. But I fear the electorate will vote in a Republican for governor.